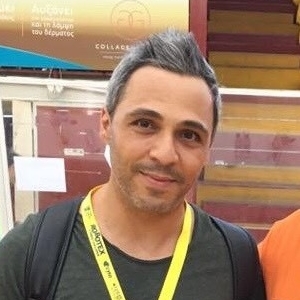 Giannos Eleftheriou received his B.Sc. in Applied Informatics from UOM and has double majored in Economics and Social Sciences.

He started his career as a researcher and innovator with Demokritos Group and has been named by Cyprus PC magazine as “probably the first Cypriot inventor in the field of Internet Technologies” for his innovative work on the “ENORASIS” project, back in 2000. He has also worked as a Software Developer, a Systems Analyst and a Project Manager for the same Group. For a good part of his professional life he was also involved in developing software for vehicle engine control units and made significant research and development in that field.

Giannos has been holding a teaching position with the Ministry of Education of Cyprus for nearly 20 years now and he teaches, coaches and mentors students and young adults in the fields of Information Technology, STEM/STEAM and Educational Robotics.

His passion for science, technology and robotics has recently forced him to take the next step in his career and form a Robotics Lab, with the goal to research, innovate and invent in the field of Robotics and STEM/STEAM. His love for fast vehicles and control engineering has driven him towards developing an ultimate competition oriented Autonomous Line Following Robot, using his own control strategies and algorithmic approaches. He is currently preparing a product line of such robots, based on his own research and development and the knowledge and experience he has acquired by participating in local and International Robotic competitions.